There are approximately 30,000 diseases known to human beings and three quarters of them have no cure. There is therefore an increased need for more accurate means of diagnosis, with understanding our own bodies becoming a necessity more than ever before. Modern technology and physical discoveries have opened new horizons for medicine, such as radiography and advanced diagnostic procedures such as computed tomography.

This research by Dr. Hamza Aliwah (medical student at the University of Washington) aims to demonstrate the possibility of visualizing the human body from the inside and displaying it on a 3D screen, creating a link between the applications of physics, radiography and medicine.

The importance of research lies in being a facilitator for the diagnosis of diseases. Imagine being able to perform an entire virtual surgical operation after seeing the human body from the inside! Especially these days when virtual reality is so close to being launched.

THE RESEARCH REVOLVES AROUND 3 MAIN POINTS:

Eye: Visible light is a type of electromagnetic radiation visible to the human eye. Our perception of color depends on the perception of the wavelength of light (or a combination of wavelengths of light)

3D perception occurs when there are 3 visible dimensions (horizontal, vertical and depth) 3D that you look at with your eyes appear due to the presence of depth, which is the main factor that research has attempted to apply in technological display tools to make them capable of displaying 3D images or videos. An example of creating a 3D view is when the 3D glasses have two images (same images but different angles) to the human eye. Each image is sent separately to one of the eyes, tricking the brain into the presence of depth. Thus, the image appears in 3D

CT scan: CT scan is a painless diagnostic test that uses X-rays and computers to create cross-sectional images of the bones and tissues inside your body. It is performed using a large square or round X-ray machine with a tunnel in the center. CT is used in serious medical conditions such as heart attacks and strokes. etc 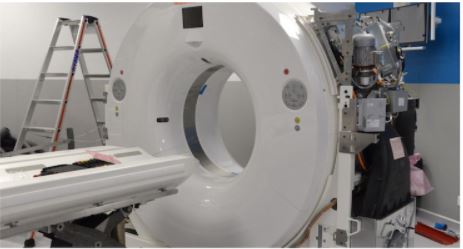 Physics: Here, research focused on the laws that fully support the idea in theory before starting the application, choosing the laws and detailing them carefully was a difficult challenge.

But the biggest challenge was to create a scientific logic link between technology and physics, and the ability of the eye to see the picture always had to be taken into account. Therefore, the physical laws have been carefully selected so that the idea is theoretically proven before starting the application, all in accordance with the principles of three-dimensional vision.

The main surprise of this research is that 3D viewing does not require auxiliary glasses like other currently popular 3D viewing methods.

The idea was patented after being presented to a panel of scientists at the “Humming Bird” conference. The research was theoretically proven and adopted by a funding company, and an experimental model was designed for it, which was presented in the German capital, Berlin, at a conference in late March.